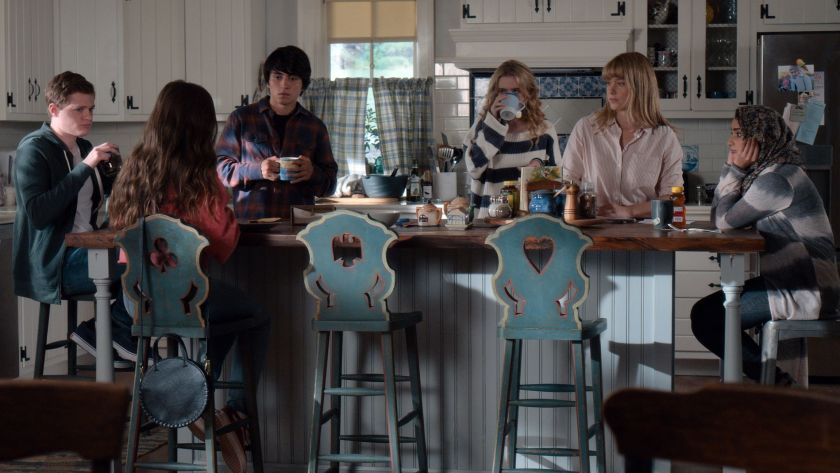 The Society Season 2: It has been almost a year since we last saw Netflix’s young adult drama- The Society. The show left all the fans crying out loud, asking for The Society Season 2. Created by Chris Keyser, the show follows a bunch of teenagers of West Ham who are mysteriously transported to an alternate reality. It looks exactly like their home town. In the meantime, all their parents, siblings, and family are in the original town that is exactly the same but only with the teenagers missing.

The first season solved many mysteries. The teenagers even found ways to survive in an alternate reality. But, one big question remained answered. Will these young teenagers ever be able to go back to their homes? Maybe, Maybe not? Who knows? The Society Season 2 is coming to answer that and many other questions. Here is everything about it-

In the first season of The Society, all the teenagers from the town had been transported into a parallel universe while everything was the way it was before in the West Ham. Only the teenagers of the town were missing. There was a plaque on the wall that read, “We remember them.” However, it was still unclear whether or not the town residents understood what happened to their children and what they were doing about it.

The Society Season 2 will most probably have this naturally developed narrative. Will the teenagers find their way back home? Or will they be stuck in the parallel universe forever? There are many questions about their disappearance. Like, how were they transported in an alternate reality? Will more problems cross their way? We will know as The Society Season 2 comes out.

What Will Happen With Campbell, Lexie, and Harry In Charge?

In the first season, Grizz went on for an expedition with some other students where they found a land where they could cultivate crops. Grizz called it a means of surviving in the place. They also found turkeys and discovered that they could fish in the alternate universe. That means, if the local stores run out of food, they will have other means to feed themselves.

All this victory fell short when Campbell, Harry, and Lexie took over the control of the new town in the parallel universe. Allie and Will were forced out of control. Now that the trio is in charge, everything will undoubtedly get uglier. Especially more if Campbell gets things done the way he wants. It will be very interesting to see what happens to Elle, now that Campbell knows that she had tried to poison him.

Will Allie and Grizz Together Solve Problems In The Society Season 2?

In an interview, Actress Kathryn Newton who plays Allie on The Society, revealed what she feels about her character and the others. She revealed that she was really mad. She wanted Allie to be in the position of power. Newton went on to say that she has learned a lot from her character Allie. She says that Allie is someone who knows everything, and now she will let everyone come onto her. Allie can’t trust anyone anymore, the actress added. However, she also hinted at the possibility that she might trust Grizz? Kathryn says that she loves Grizz and feels like together the two will come up with something. He is still by Allie’s side.

Jack Mulhern, the actor who plays the character Grizz, also revealed what he thinks about his character. He said that he doesn’t believe that Grizz is someone who believes everything that is told to him about everything that’s going on. The actor reveals that his character might be at a point of conflict in the future. But he will indeed fight for Allie in the upcoming installment.

In an interview with Metro, showrunner Keyser spoke about his ideas on The Society Season 2. He said that Ali had initially brought up a question. He asked what happens to his political position irrespective of the other world. Will people believe that Ali and Casandra were doing the right thing? Or will they be the autocrats in their own right? However, they did not take revenge. Now we will get into the part where they will actually start punishing people who do not agree with them, and that will be a huge risk.

The showrunner added that at the moment, he doesn’t know what will happen in the show. He promised that if all this power thing goes on for long enough, the picture will change. It is a very fluid thing, he added. He also said that they don’t have everything worked out on their end. They have many ideas. In fact, he said that they were in their personal cliffhanger.

Keyser says that they have a large cast. No one from the cast is from outside. They can go to a lot of places when it comes to power-sharing and stuff. In some ways, the whole world is open to them. He does not just mean the politics, but everything else, the showrunner added. They are reliant on what the audience wants. They will provide that.

Who Will Return For The Society Season 2: The Cast

Almost all the faces from the first season of The Society are coming back. However, there are some shakeups in the cast for The Society Season 2. Olivia Nikkanen, who portrays Gwen, is now a series regular. So, fans will get to see more of her in the upcoming installment. Her official character description describes her as someone who you don’t want to be on your bad side. She isn’t the Queen bee, but she is a member of the royal court. Her status is not very certain in New Ham. Gwen has anxiety and sometimes is vulnerable. But, her humor, wit, and all the hidden talents will redefine her in the new world.

Chaske Spencer would come back to The Society Season 2 as Mr. Pfeiffer. He was the bus driver who took the kids on their school trip. The viewers saw him arguing with Karen- Harry’s mum and Campbell and Sam’s Dad- Dough when the show began. Fans of the show are quite suspicious about him. Could he have something to do with all this?

In The Society Season 2, we might not get to see Allie’s older sister Cassandra. She was shot dead in the first season. And, Dewey who was convicted and then executed for murdering Cassandra. But could we be sure that they are not coming back? We better not be. The story is based on an alternate reality, and honestly, anything can happen there.

The Society got renewed for a second installment in April 2019. This renewal came as no surprise. The first season of the show concluded with many loose ends, and they had to be tied. In addition to that, the show was quite appreciated by the fans bagging great viewership.

The show kicked off the production late in 2019. The producers announced that the fans might have The Society Season 2 in the latter half of 2020. However, now with the global pandemic going on, it seems even less likely that we will get the show anytime soon. New updates will keep coming about The Society season 2 eventually. We will keep passing them to you so you stay tuned with us and don’t miss any update. In the meantime, The Society season 1 is available on Netflix for you to watch if you haven’t already. Stream in.