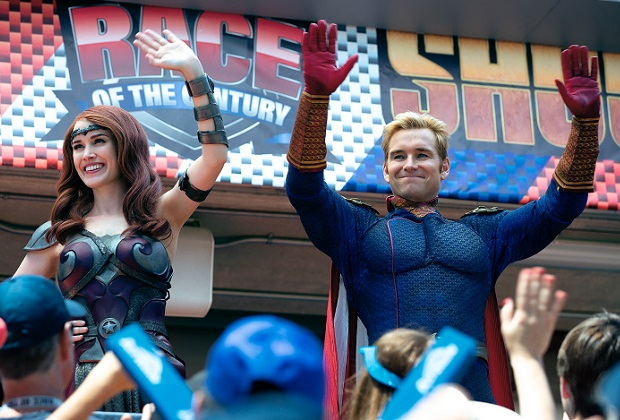 The Boys are back in town! Amazon has released the promising trailer of its famous show ‘The Boys Season 2.’ With so much struggle in the current scenario, The Boys will finally be landing successfully. Fans will, therefore, see more of superhero stuff on the web. So, better get ready to know a few spoilers of the upcoming season.

The Boys is a superhero TV series based on the comic book of the same name by Garth Ennis and Darick Robertson. The show follows a team of vigilantes fighting back against the superpowered individuals. Developed by Eric Kripke, The Boys is set in a universe of superpowered heroes. The series focuses on two sets of groups, The Seven and The Boys. The team of Seven are the Vought International’s premier superheroes who utilize their powers in a corrupt way. On the other side, there is The Boys, who are vigilantes keeping an eye upon the corrupted ones. Team of The Boys are led by Billy Butcher and that of Seven by egoistic and unstable Homelander. As the conflict grows between the two groups, new members get introduced in each team. It is further to be seen what new challenges will come in the upcoming season of the show.

The Boys Season 2: Trailer Out!

The first look of The Boys Season 2 promises a lot of excitement in the coming future. In the trailer, we saw superpowers bent in every direction. In the forthcoming season, we will see the mortals meeting the ugly demise. The shows give the taste of The Boys that they will not be the faint of the heart instead has something to say with force. The Boys are coming up to meet all your fancy expectations.

Kripke dropped the spoiler by hinting at us about the future scenario. He said that Frenchie and Kimiko would be dealing with some ‘real conflict’ with their relationship in Season 2. However, both Fukuhara and Kapon acted the shout of the scene. The further storyline for two characters will indeed be deeper and beautiful in The Boys Season 2.

Starlight Will Step Into A Role She Never Had

Annie did spend a lot of time in Season 2 grasping the fact that her powers didn’t come from where she thought it did. We will, therefore, see a specific change in her character. Starlight will step into a role that she never had before. We can only hope the change to be a positive one. Moreover, she may be a new team leader or maybe not. There is a lot to happen in The Boys Season 2.

With a hint of the upcoming storyline, the show has also released the premiering date of The Boys Season 2. The next season will air on September 4 on Amazon Prime Video. The first three episodes of the second season will arrive on the premiere day, whereas the rest will come weekly thereafter. Stay in the link. We will always be updating you with new stuff.