Murdoch Mysteries Season 15 Episode 11: The Detective Deals With Mysterious Circumstances During A Vacation In “The Night Before Christmas”! 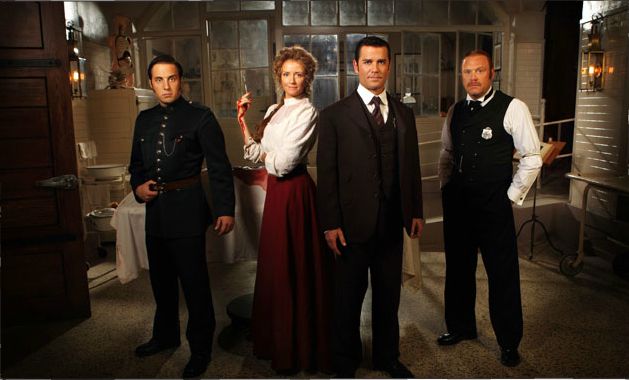 It looks like Murdoch and the team will celebrate Christmas at a Country Estate in Murdoch Mysteries Season 15 Episode 11. However, the celebrations will come to a halt when a mysterious situation occurs during the vacation. They will have to work on solving this mystery in the upcoming episode. Hence, continue reading to discover all the information about the eleventh episode.

Murdoch Mysteries Season 15 Episode 11 Preview: What Will Happen Next?

The upcoming episode of Murdoch Mysteries Season 15 is titled “The Night Before Christmas.” Murdoch and his team will be taking a vacation in Episode 11. They will celebrate Christmas at an idyllic country estate. However, some mysterious circumstances will spoil their vacation as they will have to work on solving the mystery. It could be a possible murder or a deeper conspiracy that Murdoch and his squad will be dealing with in the next episode.

In the previous episode of Murdoch Mysteries Season 15, Dr. Hulia Ogden and Cherry attended Mr. Dennison’s part, which was supposed to be awarded the Joseph Kratz award. However, Mr. Dennison also had a lot of haters as he referred to himself as the most hated man in Toronto. Meanwhile, Cherry talked to some of the renowned personalities to get funding for her project. Unfortunately, Mr. Dennison was mysteriously shot at the party, leading to his death.

Thus, Murdoch and his team secured the party, not allowing anyone to leave the party. During the investigation, they found out that Mr. Dennison’s cartoon, which was supposed to be printed in the paper the next day, was missing. However, the cartoon was posted the next day in the newspaper. Therefore, the team suspected a copycat’s involvement after another cartoon showed up in the newspaper even after Dennison’s death. Moreover, Murdoch also discovered the tiny bullet which was used to kill him.

The investigation led Murdoch to the upcoming vote regarding the destruction of a building close to the Bloor Street Bridge. The team also suspected Mr. Fox, who used to work with Dennison. It turned out that Cherry’s pen was used to fire the bullet. It turned out that the killer was targetting Cherry as she helped save a building in front of the Bridge.

In the end, Mr. Fox confessed that he was the one who planted the pen on Cherry. Meanwhile, Violet Hart spent time with Miss Cassiopeia, who desired to become like her. However, her plan was ruined when she found out that Miss Cassiopeia was marrying a rich white man in Murdoch Mysteries Season 15 Episode 10.

The eleventh episode of Murdoch Mysteries Season 15 will air on CBC at 8:00 p.m. ET in Canada. Each episode has an estimated runtime of around 45 minutes. Acorn TV will air the upcoming episode in the United States. In addition, season 15 is also available on iTunes and YouTube TV.