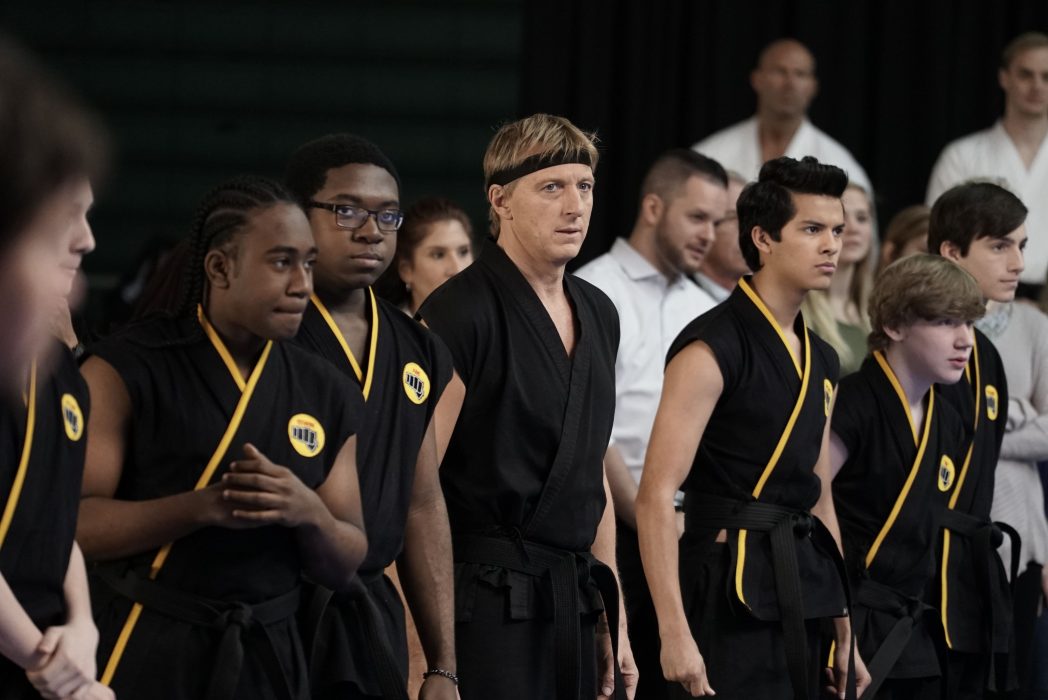 Get ready for some Martial arts action, as Cobra Kai Season 4 is returning very soon. The third season of the popular drama series aired on New Years Day of 2021. And since then, fans have been tirelessly waiting for the premiere of the next season. Luckily their wait is about to end.

Cobra Kai is a famous martial arts drama series that first released on YouTube in 2018. The series created by Josh Heald, Jon Hurwitz, and Hayden Schlossberg is based on the characters from the 1984 cult classic movie The Karate Kid. The series revolves around two Karate trainers, Johnny Lawrence and Daniel LaRusso, who reignite their decades-old rivalry. The feature ‘The Karate Kid’ actors William Zabka and Ralph Macchio, reprising their roles from the original film. Two karate training institutes Cobra Kai and Miyagi Dojo, compete for glory in the series.

Cobra Kai was first released as YouTube Orignal. However, given the immense popularity of the series, Netflix has picked up the show for the third and season onwards. The critics have received acclaim and praises for its nostalgic storyline, captivating characters, and light-hearted humor.

The show also received some backlash due to the lack of diversity among the characters. Overall, fans’ reaction towards the show has been outstanding. Now, the fourth part of the series is around the corner. And the viewers can not be more excited for Cobra Kai Season 4.

Netflix recently dropped the official trailer ahead of the release of Cobra Kai Season 4. Johnny and Daniel will finally bury the hatchet and join forces to win the All Valley tournament in the upcoming season. In the trailer, fans can hear Daniel talking to his spouse Amanda. He says, “If Johnny and I can actually work together and we win, Cobra Kai will be out of business.”

The trailer features both groups preparing hard for the upcoming battle in the tournament. Even there is a lot of difference between Johnny and Daniel’s training methods. Johnny’s uncanny training practices are not like Daniel’s conventional karate techniques. However, they both believe that they can work together for the common good.

The trailer also gave us glimpses of a highly anticipated rematch between both the main characters Johnny And Daniel. Meanwhile, they both expect their students to take things to “the next level.” Without spoiling too much about the following season, the trailer has made us all excited for Cobra Kai Season 4, which is releasing on December 22.

What Will Happen In Cobra Kai Season 4?

The third season of Cobra Kai concluded with the formation of a union between Johnny and Daniel to beat Kreese in the U18 All Valley Karate Tournament. After Kreese declared that if they lose, he will quit Cobra Kai. Meanwhile, Daniel and Johnny began the preparation of their students at the Miyagi dojo.

On the other hand, Kreese talked to an old friend of his for help. Also, Hawk went against his pals at Cobra Kai and allied with Demetri as he was seeing the slow decline of Cobra Kai. Finally, Robby took up Kreese’s side before the coming tournament.

Now, Cobra Kai Season 4 can head in several directions. As the ending of season three indicated, the next season will focus on the upcoming All-Valley tournament. Kreese has stated that he would leave Cobra kai if he faces defeat. Thus, fans can expect him to do everything in his power to ensure his victory at the tournament and grab the championship. Meanwhile, Robby could become more important in the next season. Also, fans can see Hawk coming to terms with his darker side.

With their forces combined, Johnny and Daniel might seem like they have the edge. But they will have to put everything they got and more to win the tournament. Especially after Kreese’s little talk with Terry Silver can come into play. Also, viewers are expecting the rivalry between Tory and Samantha to carry on in the next season. Also, Johnny and Daniel will have a chance to improve their relationship as they are working together. And above all, Cobra Kai Season 4 will feature high-class martial arts action in the All Valley Tournament. So, don’t miss it, and stay tuned with us for more updates.