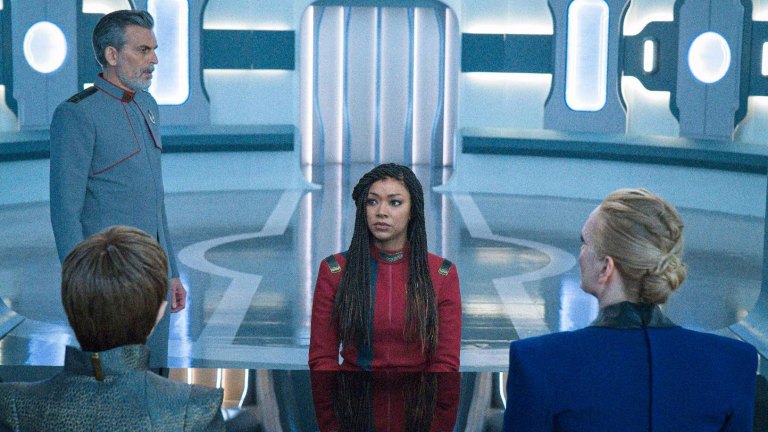 Burnham and the Discovery crew will race against time to make the first contact with Species 10-C in Star Trek Discovery Season 4 Episode 12. As the DMA approaches Earth, Burnham will try to communicate with the alien species and urge them to stop. However, Book and Tarka might be standing in Burnham’s way. So, keep reading to know all the updates about episode 12.

Star Trek Discovery Season 4 Episode 12 Preview: What Will Happen Next?

The twelfth episode of Star Trek Discovery Season 4 is titled “Species Ten-C.” Burnham and the USS Discovery will try to make the first contact with Species 10-C while the DMA approaches Earth and Ni’Var. The crew will race against time to contact with the species using hydrocarbons to avoid total annihilation.

Unfortunately, Burnham is unaware that Book and Tarka have infiltrated the Discovery. Hence, the duo will try to jeopardize Discovery’s plan to contact the alien species in Star Trek Discovery Season 4 Episode 12.

In the previous episode, Burnham decided to visit a dead planet near the hyper field. She believed that the planet might be the homeland of Species 10C. However, Eart General Ndoye felt that it was just a waste of time. However, the diplomats supported Burnham’s decision as it could provide them with useful information.

Further, Burnham traveled to the planet with Saru, Culber, and pilot Keyla Detmer. They discovered large skeletons of the species that once used to live in the planet’s former gas layers. They also experienced hallucinations, resulting in strong feelings of fear. The crew concluded that Species 10C fled the planet during the meteor strikes. The calamity burned away the gas and killed some members of the species.

The team also discovered that the species used complex hydrocarbon compounds to communicate with their emotions. Burnham deduced that they might be able to use the hydrocarbons to communicate with Species 10C. Elsewhere, Book and Tarka followed the Discovery to the dead planet and sneaked on the ship. Tarka bypassed Zora’s sensor to attach their ship to Discovery without getting detected. Book had to take engineer Jett Reno as a hostage. He also convinced Ndoye to help them destroy the DMA in Star Trek Discovery Season 4 Episode 11.

Paramount+ will release Star Trek Discovery Season 4 Episode 12 on March 10, 2022. The streaming network drops a new episode weekly on Thursdays at 3:00 a.m. ET. And each episode of the fourth season will have around 60 minutes of average runtime.

If you miss the latest episode on Paramount+, you can stream it on CBS All Access app and Amazon Prime Video. Moreover, season 4 is available to stream on Xfinity, DirecTV, Fubo TV, and Vudu. So, don’t miss out on episode 12 and keep coming back for more thrilling episode previews only on TechRadar247.com.