Mayans M.C. Season 4 Episode 3 Preview: Will Santo Padre Return To Drug Trade In “Self Portrait In A Blue Bathroom”? 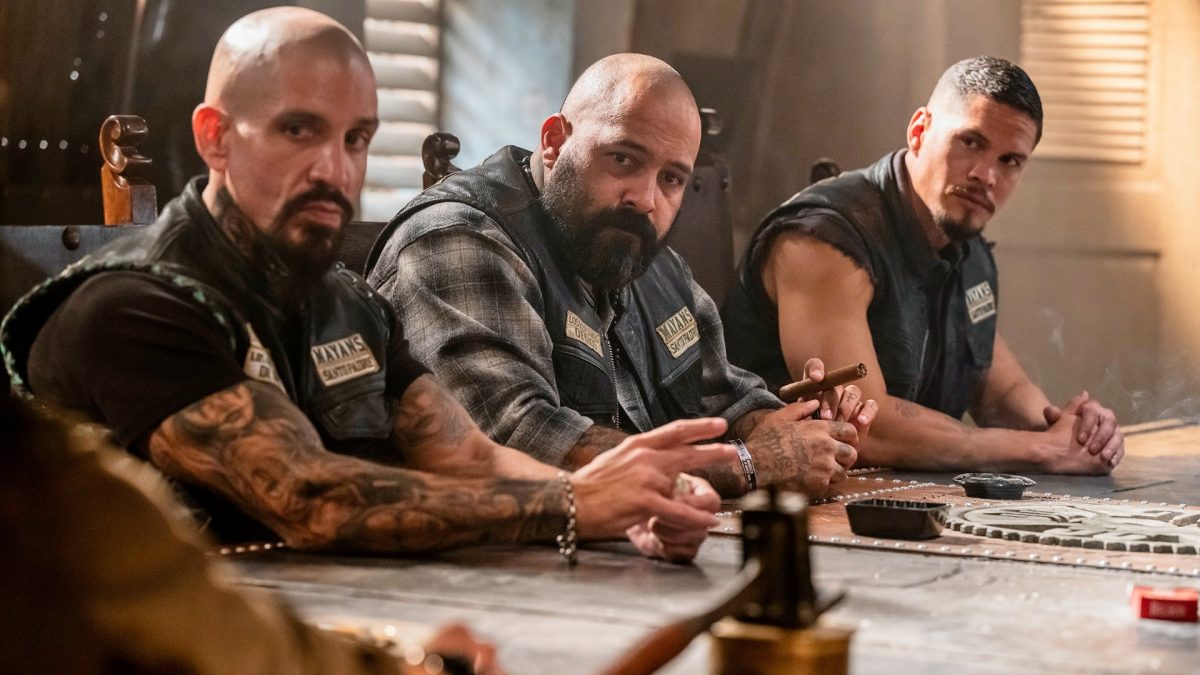 In the previous episode of Mayans M.C. Season 4, nearly four months after the war between Santo Padre and Yuma M.C, things might have cooled down. But not for long. Bishop, after stepping down from the position of the leader, is still looking for a fight and seems like he has the support of most of his men. Now it will interesting where are things header in Mayans M.C. Season 4 Episode 3.

The upcoming Mayans M.C. Season 4 Episode 3 is titled “Self Portrait in a Blue Bathroom”. The official synopsis of the episode is here, and it gives us a brief idea of where will the next episode head. We might see Santo getting back into the world drug trade as he has been contemplating it.

Santo Padre may have to ask E.Z. for a favor in order to return to the trade. It’s unclear who is coming from. We think this is Manny because E.Z. was seen shaking hands with him in the prior episode. Apart from that, we expect Terry, Sons Of Anarchy’s vice president, to begin plotting his first steps against Mayans M.C. In addition, to all this, we can expect a whole lot of drama and intense scenes from the next episodes.

The second episode of Mayans M.C. Season 4 was titled Hymn Among the Ruins. The episode takes place nearly four months after the end of the confrontation between the Santo Padre and Yuma M.C. After the things have calmed down since the start of the year, multiple fragments of the Mayan have joined forces to create one big entity. After Bishop stepped down from the position of the leader, he was replaced by Marcus as the new chief. Meanwhile, Bishop was managing the responsibilities of the vice-president of the organization.

Elsewhere, Jazmine and Jessica managed to make their way to Terry, the vice president of Sons of Anarchy Productions, by the end of the episode. Previously in the episode, Jess recovered a Sons Of Anarchy vest in a landfill while working at the Santo Padre club, she took it to Terry, and he accepted it. Earlier in the episode, Terry voiced his wish to take down the Mayans as they trespassed into the territory of Sons Of Anarchy. However, others deny his wish. Nevertheless, he now has a whole new reason to go after them after the jacket incident.

When And Where To Watch Mayans M.C. Season 4 Episode 3?

Fans have been waiting for the third episode of Mayans M.C. Season 4 ever since the last episode dropped a week ago, on April 19, 2022. Now the wait is almost over as we are only a few hours away from the episodes. Mayans M.C. Season 4 Episode 3 will is set to premiere on April 26, 2022. Fans can catch the broadcast of the episode on the Fx network at 10 pm EST. On the other hand, the episode will also be made available to stream on the streaming platform Hulu.