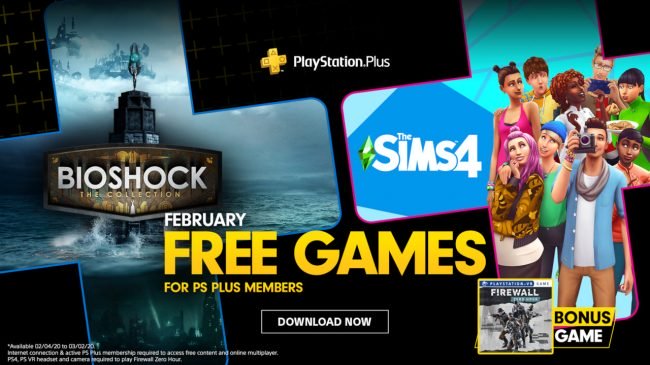 The most anticipated games are coming to PS Plus for free in the coming month. From February 4, 2020, you will be able to download the first batch of PS plus games and this time there is a bonus game for PSVR owners. The games that PS Plus members will be able to download includes: The Collection, The Sims 4, and the most famous PSVR shooter Firewall: Zero Hour.

This bundle includes the most liked games in the last generation which are: BioShock, BioShock 2, and BioShock Infinite. Nonetheless, each game has single-player DLC mode plus the director’s commentary from series creator Ken Levine. The multiplayer feature is not included in this bundle but all the games will be in 1080 resolution and 60 frames per second. A newly built studio called Cloud Chamber is currently developing a new entry in the series, with the release date not specified yet.

On the 20th birthday of the Sims series, the Sims 4 will be available to download as a free PS Plus this February. This game first arrived on PC in 2014 and later it was available on consoles in 2017. Similar to many games in the series, The Sims 4 will also be having a wide-range of expansion packs to choose from, for example, University add-on, and , Cats and Dogs. Just the base version of game will be available to download on PS Plus, but if you want the expansions, then you need to buy them separately.

It is a multiplayer strategic first-person shooter game which w as developed exclusively for PSVR. This game gives its players a very unique online adaptive tactical experience. Once this game will be available to download from next week, a huge surge in its player-base is expected.

Since March 2019, after the departure of PS3 and PS Vita games from PS Plus service, Sony has been giving its subscribers two PS4 games each month, but from next month they have added a third title for PSVR users. It is not sure yet whether Sony will continue to offer more than two games in the coming months.

Reminder: You still have time to download January 2020’s PS Plus games, which are Uncharted: The Nathan Drake Collection and the wacky Goat Simulator. If you don’t have a plan to play these games in the near future, at least add them into your library, so as long as you are PS member, you will access to each game that you have added to the library.