A lot of things transpired when The Morning Show Season 2 Episode 10 aired on Apple TV+ today. The series has taken some crucial turns, which would require a powerful follow-up from the next season. The series ended with Cory finding out that Mitch talked about Hannah before dying. This means that the story Cory has been trying to bury is once again staring in his face.

Meanwhile, the final episode focused on Alex catching the virus and Chip pitching a show about it. Also, the UBA’s streaming site has taken a great hit after the pandemic and slowed the progress by forcing the employees to work from home. Keep reading ahead to know everything that happened in the final episode of The Morning Show Season 2.

Alex Contracts Covid-19, Chip Makes A Show About It

Alex contracted the virus after returning from Italy in The Morning Show Season 2 Episode 10. The executive producer of TMS, Chip, suggested the idea of making a COVID-19 program for UBA+, the network’s streaming platform. Cory agreed, and Chip headed to Alex’s apartment. Alex told him not to enter the apartment, but he lied about having the virus already. The duo made the program with Alex talking about the virus, Mitch, and Maggie’s book. She also revealed on-air that Chip lied about the virus. He received a call from his fiancee soon after, but Chip ignored it.

Cory Confesses His Feeling For Bradley

Bradley does not know that Cory was the one who leaked the story about her and Laura’s relationship. He kept the truth from her and confessed his feeling for Bradley. Cory said he loves Bradley while the two desperately look for her brother Hal. Soon after, Bradley received a phone call from the hospital about Hal being in the emergency ward. Next, Bradley and Cory rush to the hospital to see her brother in The Morning Show Season 2 Episode 10.

Alex tested positive for the Coronavirus. Thus, Stella sent all the employees home. After that, Stella requested Daniel to host the show in place of Alex. However, he refused to do it, and Stella informed her about the contract he signed. Daniel doubted him being valued at the UBS and chose to quit.

Meanwhile, in The Morning Show Season 2 Episode 10, Cory had an interview with Paola Lambruschini. She is a documentary filmmaker who was there for Mitch during his final days. She showed him an interview in which Mitch was talking about Hannah Shoenfield. The video shocked Cory as he had no idea what to do.

The Morning Show Season 3: When Will It Return?

Fans have enjoyed the second installment of the series, with viewership stats soaring high on Apple TV+. The show’s executive producer and director, Mimi Leder, said that the network had not confirmed The Morning Show Season 3 yet. However, they are aware of the impressive response from the audience. Thus, we can expect the third season to return in 2023. 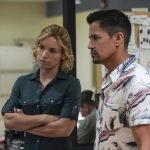