ABC’s reality dating series is returning for The Bachelor Season 26 very soon. The show has been among the network’s most-watched series since its premiere in 2002. And for this season, we will have a new bachelor from Michelle Young’s The Bachelorette. He will have to find a perfect woman among 33 potential contenders.

The reality series focuses on a single bachelor looking for a partner. The bachelor finds his perfect match through a series of challenging activities, multiple solos & group dates and revealing conversations. Over the course of weeks, weak contestants are banished from the show to keep the quest moving ahead. So who will be our lucky contestant this time around? Keep reading on to find out!

The Bachelorette Season 18 Contestant Clayton Echard Will Be The Bachelor

The search for the next bachelor began in August 2021. Tyler Cameron was considered the perfect choice for Season 26. However, his contracts with Fox’s The real Dirty Dancing came in the way. Thus, the casting director looked for potential candidates from Michelle Young’s The Bachelorette Season 18. And on September 15, Clayton Echard was announced as the new bachelor for the next installment.

The 28-year-old is a medical sales representative in Eureka, Missouri. He graduated from the University of Missouri in Columbia. Also, Clayton represented Mizzou as a professional American Footballer. Clayton began his journey by appearing in Michelle Young’s season of The Bachelorette. Initially, he did not attract much attention but still made it to the top 8 of the season.

However, Michelle did not take him to Hometowns. Eventually, he was nominated for the show. But luckily, he will have the opportunity to find his own bride in The Bachelor Season 26. As per the latest trailer, Clayton seems to be extremely sure that he will find his perfect bride this season. The video also shows instances of a lot of drama, traveling, tears, and love in the upcoming season.

The show’s original host Chris Harrison has stepped down this season. And Jesse Palmer will replace Chris after his incredible journey as the show’s host for more than 20 years. Palmer is a former Giants player, a former bachelor, and currently works as a football analyst at ESPN.

Lately, Jesse appreciated Harrison’s contribution to the show. In addition, he shared Chris’ support during his quest as a bachelor previously. Jesse plans to keep up with his legacy and is looking forward to use his bachelor’s experience to host the show ideally.

The Bachelor Season 26 was announced by ABC in September. Clayton was officially announced as the bachelor in November. However, filming for the next installment had already started in September 2021. The filming returned to the renowned Villa de La Vina mansion in Agoura Hills. The production also moved to various international locations during the filming schedule of season 26. The filming for the upcoming season has wrapped up. The next season will premiere at the beginning of 2022.

ABC will air The Bachelor Season 26 on January 3, 2021. The upcoming season will be available to stream on Hulu the next day. So, don’t miss the premiere episode of season 26 and keep coming back for more informative news updates. 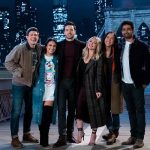