Will There Be A Season 3 Of The Walking Dead: World Beyond?

The second season of The Walking Dead: World Beyond concluded on December 5, 2021, on AMC. And unfortunately, we have some bad news for the fans eagerly waiting for The Walking Dead: World Beyond Season 3. Our time with this new band of survivors has come to an end as the network has confirmed the cancelation of the show. It looks like the third season may never happen.

During a conversation with Entertainment Weekly in 2020, showrunner Matt Negrete explained that they have always planned the spinoff to be of twenty episodes or two seasons. They undertook the approach to tell the entire story in these 20 episodes, and there is no plan regarding The Walking Dead: World Beyond Season 3. He also stated, “We’re really looking at these two seasons as two very different feeling chapters of hopefully a very satisfying book. We’re closing in right now with the writers on the last few episodes. So we’re getting down to the wire. It’s exciting. I hope people dig it.”

Although, there could be a silver lining if the network renews the show for The Walking Dead: World Beyond Season 3 on public demand. This situation has previously come up with many big shows. And after witnessing the fans’ desire to get back the show, many a networks have picked up their pre-canceled shows for further seasons.

Did The Group Reunite?

The group had split up by the end of the series. Elizabeth, Hope, and Huck were all together. Silas was apprehended by the CRM, but he was kept apart from them. Iris and Felix were sheltering together with Felix’s boyfriend Will, and Elton’s location was unknown.

This was a recurring concept in all of The Walking Dead shows, in which characters from the core group split apart and eventually reunite at some point. While it may be exciting for the show to follow each character’s story all the way to the finish, fans want to see everyone reunited at some point. So, if the third season of The Walking Dead: World Beyond returns, what will happen? Let us find out-

Is Leo Actually A Good Guy?

Even though Leo has made some questionable choices in the series, fans would really like to assume that Leo, Iris, and Hope’s father, are among the good men who are unaware of or at least disagree with CRM’s evil deeds. In season one, he showed signs of his naivety when he expressed concern to his fiancée Lyla about strange things that had been occurring, such as his buddy leaving under dubious circumstances.

So, if Leo is revealed to be a villain, that would be a huge twist. Nonetheless, before the series concludes, fans will want to know more about that guy, including how far he’s progressed with his studies, what he knows, if he’s genuinely safe, and how near he is to discover a treatment.

Hope To Learn The Truth About The CRM

Hope was separated from her sister and only heard one side of the story from Elizabeth, who was giving her misinformation about what happened on campus. As an intelligent individual, Hope was undoubtedly aware of some inaccuracies. However, her obsession with surviving, reuniting with her father, and being safe may impair her judgment.

It’s critical that Hope discovered what happened to all of her old friends, teachers, and associates on campus in The Walking Dead: World Beyond Season 3. And that the CRM was behind the actions for personal gains rather than the looming threat of a horde of walkers.

What Is The CRM’s Endgame?

Another burning question that fans want The Walking Dead: World Beyond Season 3 to answer is what the CRM’s true mission is and how they intend to accomplish it. From what we know, it appears that the CRM wants to establish a new world order of some kind. They are preserving assets that may prove to be helpful in their scientific project to start a new society and discover a remedy for the virus that turned dead man-eating zombies.

If this is the case, why would Elizabeth destroy an entire community of educated, hardworking, and potentially bright young learners who could serve as the foundation for the new society? All of this is for the sake of a little girl who may be a genius. Since the CRM’s presence was initially alluded to on other shows, viewers have been asking themselves this issue. It’s a tricky balancing act, as the show must conclude in a sensible manner without jeopardizing the other series’ narratives. Regardless, there must be a major reveal.

Also Read The Walking Dead: World Beyond Season 2 Episode 9: The Group Tries To Stop The CRM’s Master Plan In “Death and the Dead”! 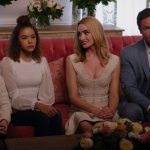