Adult Swim has always been one of those networks that are pushing the boundaries of the content we watch. And the live-action comedy-drama series about a modern-day Jesus Christ of color, Black Jesus. Ever since the third season of the comedy series ended in November 2019, fans have been waiting for its comeback with Black Jesus Season 4. But is it coming back?

Black Jesus is an American comedy-drama series that debuted on the platform in 2015. The series follows a Black Jesus Christ from modern-day Compton, California, with the same mission as his Middle Eastern counterpart. The series developed by Aaron McGruder and Mike Clattenburg has garnered positive reviews from critics all around and fans likewise.

Will There Be Black Jesus Season 4?

The third season of the show premiered on Adult Swim on September 20, 2019, and the season came to an end on November 29, 2019. Now talking about the fourth installment of the series, we are sad to inform the fans that the network has already cleared up that Season 3 was the final season of the series. Thus, the show officially stands canceled, and there will not be a Black Jesus Season 4. Although fans are not happy with the news, some are content with the way the storyline of the show has been wrapped up.

The last season of Black Jesus followed the protagonist as he was spreading love and kindness around the neighborhood. On the other hand, a local caped crusader was getting attention from the people, including the Pope himself. Meanwhile, Jesus faced new challenges after his release from jail as Boonie moved to New Compton Gardens. Elsewhere, The Vatican hired two secret agents to capture Jesus to check if he was real after watching a video of his miracle.

AmBro, the neighborhood’s security chief, deploys troops to thwart drug sales. At the same time, Jesus gives Boonie a firsthand look at how hard it is to be the Son of God. Meanwhile, Jesus has to stoop the new vigilante in Southwest Compton. After getting a business loan, Tudi launched her own line of products. And the news is not well-received by the Korean Bitch Mafia.

Boonie believes the spirit of an evil gangsta has captured his soul, and he begins to behave that way. Following that, Jesus is hired as the head coach of the Compton Devils’ junior high football team. If the series comes back with Black Jesus season 4, the story will continue after the events of the third season. In the next season, we will see the titular Black Jesus and his companions moving ahead on their mission while dealing with several snags in the way.

If the series is recommissioned for Black Jesus Season 4, we can expect most of the main cast members to be back in their respective roles. On the contrary, the cast of the show might also expand in the next season, bringing some new characters to the scene. 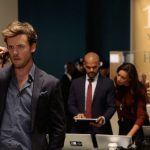