It looks like All American Season 4 Episode 17 will continue to deal with the problems Olivia will face while working on her new project. Now things will change between Olivia and Spencer, and they will have a hard time dealing with the chaos. They need to talk to each other and sort the grudges between them. Meanwhile, things will be quite challenging in Asher’s life. Keep reading to know more.

All American Season 4 Episode 17 Preview: What Will Happen Next?

All American Season 4 Episode 17 is titled “Hate Me Now,” Sheelin Choksey directed it, while Obiageli Odimegwu and Spencer Paysinger wrote it. Well, everyone knows Spencer and Olivia love each other. And this upcoming episode will focus on their relationship. They are dealing with two different things. Spencer is focusing on his career while Olivia is busy dealing with her projects. It will ultimately put a strain on their relationship. They will learn how much they have changed now and might work on it.

Meanwhile, Jordan and Layla will go on a road trip to San Diego. And Jordan will help Layla deal with her situation and helps her gain the courage she needs. On the flip side, Asher will pay a visit to Billy for his advice and will ask for a big opportunity. Now he has to prepare a movie that will showcase everyone’s strained relationship and how things will change afterward. Meanwhile, Patience and Coop will try to deal with a new situation in All American Season 4 Episode 17.

In the previous episode, titled “Labels,” Spencer tried to find his true identity. Everyone was trying to find out their true identity and brand, which was the episode’s central focus. Jordan finally came out of his misery. Layla was also trying to figure out things. But it was Olivia who created the fuse in Jordan’s case. She narrated the story of Wade. He skipped the practice to sign his NIL deal and later gave Jordan a chance to get the limelight on the last play. But Wade accused Olivia of approaching him to clear Jordan’s path. Unfortunately, Spencer got trapped in this battle.

It appeared legitimate for Olivia to write about Wade’s self-centered nature. But she needed to tell Spencer and Jordan first before things turned out against her. She decided to stay a podcaster. But her current job demands more creativity. Patience was worn out from dealing with Coop all those years that she didn’t have enough energy for her music career. So, instead of working on her music launch, she decided to chill in Beverly. Meanwhile, Jordan and Layla had a hard time facing each other.

All American Season 4 Episode 17, titled “Hate Me Now,” will air on Monday, May 2, 2022, at 8/7c only on The CW. The all-new episode follows a weekly release schedule. You could stream All American on The CW app if you missed it. Further, you can also watch it on Fubo TV, DirecTV, Sling TV, and YouTube TV. So don’t miss it. TechRadar247 will keep you updated. 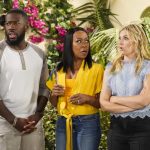