At the end of the last episode of Law & Order Season 21, Collin Baker was revealed to be the killer of Alexis Morphew. However, there will be a different challenge wait for our favorite detectives in Law And Order Season 21 Episode 9 as they try to find the murderer of a young Manhattan socialite.

What To Expect From Law & Order Season 21 Episode 9?

Fans have been curious about what the upcoming Law & Order Season 21 Episode 9 has in store for them. Now, thanks to the official synopsis of the episode, we do have an idea of what will the next episode titled ‘The Great Pretender’ will be about. The summary states, “Bernard and Cosgrove must sift through fact and fiction to find the killer of a young Manhattan socialite. The murder trial takes a turn that becomes personal for Price and puts Maroun in a compromising situation.”

The next episode will feature detectives Cosgrave and Bernard going through a whole lot of trouble in order to find the person responsible for the killing of a young socialite from Manhattan. However, things will take a drastic turn suddenly, which will put Maroun in a difficult spot.

The previous episode of Law & Order Season 21 was titled “Severance” and was directed by Yangzom Brauen. At the beginning of the episode, we saw Alexis Morphew receiving a text message, after which she joined a meeting with five people. She told them that they must stop what they had been doing and said she would see them tomorrow. After that, someone arrived at her door. Though we did not see who is it, we saw her asking what the hell they were doing there. Alex was found dead the next day; Cosgrove and Bernard arrived at the site.

They meet with Collin Baker, who claimed they spent sixteen hours a day in virtual sessions; she appeared preoccupied. Her phone records revealed a large number of texts. Alexis’ supervisor informed Cosgrove and Bernard that she was having issues with a previous employee, that he elevated her to CFO, and that her predecessor accused her of sabotage. The emails were easy to locate. Alexis filed them away in a drawer labeled “threats.”

Terry Valentini has been sending Alexis texts threatening to kill her. He also has a bad temper. His ex-girlfriend obtained a restraining order because he was getting personal with her. Collin Baker was discovered to have killed Alex towards the end of the episode. And he appeared in court to answer for his misdeeds.

When And Where To Watch Law & Order Season 21 Episode 9!

The eighth episode of Law & Order Season 21 premiered on May 5. But that’s a thing of the past as we are just a few hours from the upcoming Law and Order Season 21 Episode 9. The next installment will be broadcast on NBC on May 19, 2022. Fans will be able to watch the episode on the NBC network on Thursdays at 8:00 p.m. ET. Also, the episode will available on Peacock. 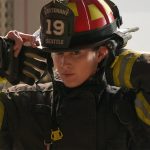