The Blacklist Season 9 Episode 20: Will Red Find The Traitor In “Caelum Bank”? 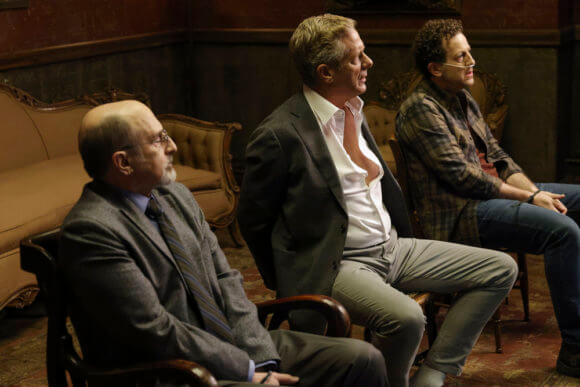 What To Expect From The Blacklist Season 9 Episode 20?

The upcoming The Blacklist Season 9 Episode 20 is titled “Caelum Bank.” It is written by Sean Hennen, and Cort Hessler directed it. Talking about the episode’s storyline, we know that Raymond Reddington will be trying to find the traitor who has been wiring money out of one of his own accounts.

“The Bear Mask” was the title of the preceding episode of The Blacklist Season 9. The episode opened with Aram visiting Dr. Idigbe and telling him that he has spent his entire life suffering from OCD and sadness. Aram came across a very large parcel wrapped up in his office. And when he opened the box, he found paper aircraft inside. Upon asking Ressler who delivered it, Resler said that he had no idea. The building’s alarms went off, and a surveillance video showed shooters entering the building and using the elevator. Dembe informed them that they were under attack.

Elsewhere, Ressler called Cooper and informed him that he had pulled every scrap of documentation on Blackman and his lawyer, LeCroy. He discovered no evidence linking them to Mr. Kaplan. But he did discover the shell company LeCroy used to conceal the blackmail scheme. He owned seven homes, a half-dozen businesses, and a boat.

Meanwhile, Aram returned to the bureau and discussed what happened with the task force. The task team had apprehended Mrs. Lecroy’s killer. They discovered a transaction on his phone in which he got $25,000 in cash. Mierce told Red that she was not furious with him. She was simply depressed. The DNA test results revealed that she was not Kate but rather her sister, Maureen.

Also Read Elliott From Earth Season 2: Will Cartoon Network Return With Another Season?