A new islander is in the house. Jack will create a problem between Gemma and Luca in Love Island Season 8 Episode 27. Will Gemma ditch Luca? Seems something dramatic will going to happen in the upcoming episode. But it seems like Danica will try to know someone, which might create a problem. Keep reading to know more.

Love Island Season 8 Episode 27: What Will Happen Next?

Ekin-Su and Davide will be on good terms. They will try their best to settle down. Ekin-Su will continue to make her move toward Davide, and it seems like it is working. Meanwhile, Jay and Danica will try to explore each other. They will give them some time. But will it change Jay’s perspective?

Meanwhile, Gemma will find Jack worth exploring, which will leave Luca worried. Will she leave him? Perhaps it could strengthen their bond. As for Dami, he and Indiyah will spend a perfect time together, while Tasha will open up her true feelings.

In the previous episode, the islanders made a tough decision to eliminate Antigoni and Charlie. It was hard for them to do so. Both Antigoni and Charlie had no hard feelings for their peers. Instead, Antigoni was happy for Danica. However, their sorrow was short-lived as the ladies were asked to go on a girls’ night out. They were introduced to six new men to enjoy their girls’ night out. Now the addition of new arrival hints at the entry of Ronan Keating’s son Jack.

Jack was glad to join the show and said his dad would be buzzing for him and watching the show. They were very close and stayed like best mates. Meanwhile, Ekin-Su and Davide spent their time together before the girls’ departure. The couple was trying their best to make it up. Davide first offered Ekin-Su her morning coffee while she later offered him his post-workout pancakes.

Love Island Season 8 Episode 27 will air on Sunday, July 3, 2022, at 9 pm GMT on ITV2. The all-new episodes air on weekdays, including Sundays. You can also stream the show on ITVhub+. The US audience can stream the show on Hulu. Stay tuned. TechRadar247 will keep you updated. 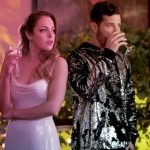