It has been about a month since the first season of Apple TV+’s Now and Then concluded. Since the show ended on a cliffhanger, fans have been eagerly waiting for what is in the future of the show. And will it return with Now and Then Season 2? So, let’s discuss what we know about it.

Created by Ramón Campos and Gema R. Neira, Apple TV+’s Now and Then is a crime thriller drama series. The show revolves around a group of college friends whose lives are connected by a dark secret.

Apple TV+ premiered the first season of Now and Then on May 20, 2022, and the season came to an end on June 24, 2022. Meanwhile, we don’t know much about the prospect of Now and Then Season 2 at this point, as Apple Tv+ has not yet made any confirmations about it. However, we’d like to inform the fans that the cast member Jose Maria Yazpik has certainly shown interest in the second season. In addition, the first season of the crime drama also performed considerably well in terms of viewership. So, signs appear optimistic, but we still have to wait for an official announcement.

What Will Happen In Now And Then Season 2?

The inaugural season of the series centered around Daniela’s death and how it was connected to a twenty-year-old case of Alejandro’s death. Meanwhile, the twists in the murder investigation affected Marcos, Sofia, Ana, and Pedro’s lives altogether. At the end of the season, Flora learns the truth that Sullivan is the one who killed Dani. And he was also involved in covering up Alejandro’s death. Meanwhile, Sofia and Marco split with each other, and Ana and Pedro were moving ahead with their political ambitions. The season ended with Flora coming to the morgue to recognize a corpse.

As season one ended on a cliffhanger note, thus, if the show returns with Now and Then Season 2, it will likely take place after the events of the first season. The second season will reveal who was dead that Flora went to see. Whoever it is, we assume that it will be connected to the lives of the main characters, Marcos, Sofia, Ana, and Pedro. There are speculations that the second season may take place two years after the first season’s events. Moreover, we can also expect the second season to give us more detail about the death of Alejandro.

Who Will Star In Now And Then Season 2?

The cast of Now and Then features Marina de Tavira in the role of Ana Vargas, Jose Maria as Pedro Cruz, and Maribel Verdu appearing as Sofia Mendieta. In the show, we also see Manolo Cardona as Marcos Herrero, Rosie Perez playing Flora, and Soledad Villamil as Daniela. The cast also stars Zeljko Ivanek playing Sullivan and Jorge Lopez as Alejandro Vilas.

Meanwhile, Darío YazbekAlicia Jaziz, Alicia Sanz, Miranda Serna, and Jack Duarte as the younger versions of the characters. In addition, Juana Acosta stars as Isabel, Eduardo Noriega plays Ernesto, and Víctor Mallarino essays Arturo Herrero. If the show is recommissioned for Now and Then Season 2, main cast members might be back in their roles. At the same time, the second season may also introduce more characters in the series.

Also Read My Liberation Notes Season 2: Is The Show Coming Back? What Are The Chances? 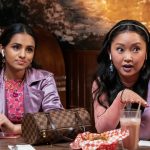