The to-be-suitors are really in a big mess in The Bachelorette Season 19 Episode 4. Many voiced their decision that they were here for Rachel, not for Gabby, and it made things worse for many of the suitors. Now is the last time to decide whether they want to accept the rose and return home. Will they ever change their mind? Let’s see!

The Bachelorette Season 19 Episode 4: What Will Happen Next?

Well, now Meatball, Alec, Termanye, and Jacob are amongst the men who refused the rose. It means anytime they can go back home. But Meatball will visit Rachel and ask her to continue their relationship. Now it will be in Rachel’s hands what she wants to do. Perhaps she will accept Meatball’s offer and give him the rose. Meanwhile, Gabby will bond with the boys and pick Johnny up for a date.

The previous episode opened up with the first one-on-one date between Rachel and Zach. Karamo Brown, Queer Eye host, met with the couple, helped them with their wardrobe changes, and prepared them for their special movie premiere. They then got ready for their full red carpet experience. Soon the couple arrived at the El Capitan Theatre in Hollywood. They bonded over the special movie and danced to a piano accompaniment. Shortly after their date, Zach admitted that he started feeling for Rachel and accepted that her rose with all grace.

Meanwhile, in the mansion, Gabby tried to bond with the guys, but they pretended she never existed. The following day, Gabby went on a one-on-one date with Erich and Granpa John. They attended a sound bath and discussed their teenage years. It went well, and Erich accepted Gabby’s rose. After the romantic date, the men prepared themselves for a massive group date. They wore several costumes for a photoshoot. Everyone did their best, but Nate stole the show. Later that night, three boys told Gabby they were in the show for Rachel. As for Rachel, she gave a rose to Aven, and Gabby didn’t give a rose to any men on the group date.

The Bachelorette Season 19 Episode 4 will air on August 1, 2022, at 8 pm ET only on ABC. You can also stream it on ABC’s official website or ABC app. Further, the show is available on DirecTV, Sling TV, Fubo TV, and YouTube TV. So stay tuned. Techradar247 will keep you updated. 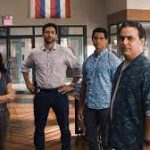