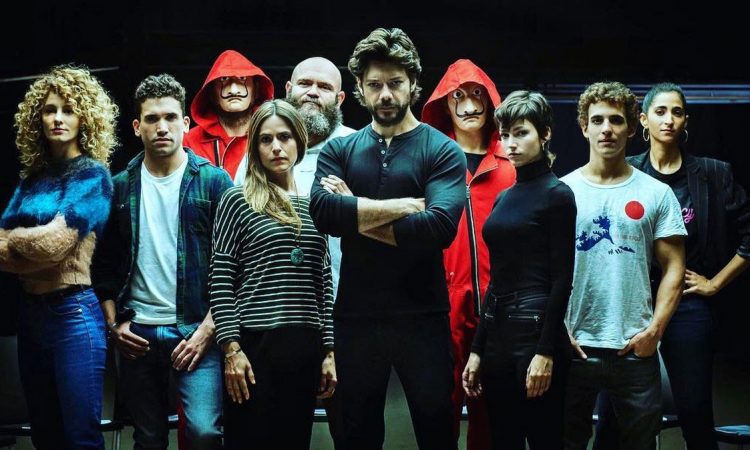 Good News For The Fans! Money Heist is not ending anytime soon. Korean creators are going beyond the borders. Moreover, Money Heist Season 5 is in production. Fans are excited to hear about the return of the famous Spanish series. The show has set its different standard and status in the world of drama. Let us dive into the impending fate of the show.

Money Heist is a Spanish heist crime drama series, created by Alex Pina. The plot revolves around two big heists led by the Professor along with the members of the group created. The mysterious man named Professor employs eight people to carry out these heists. They aren’t addresses by their original name; instead, the cities’ names are uses to address them. The first heists take place in the Royal Mint of Spain, whereas the second one is held in the Bank of Spain.

The Professor pre-plans all the heists and prepares the group members for all the possibilities. After entering the assigned crime space, we find the characters facing many problems. But, they cope up with everything by the end. However, certain circumstances do create a lot of chaos, but that ultimately brings the fun in the scene.

The famous Spanish heist series will get the Korean remake. The creators are planning to have a series of 12 episodes. Kim Hong-sun will produce the remake. He is famous for his production of The Guest and Voice and Black. However, Ryu Yong-Jae will lead the screenwriting. La Casa de Papel is the original title set on the Korean peninsula. Indeed, we will see Korean content getting a global audience.

Alex Pina says, “Korean creators have been developing their own language and visual culture for years. The Korena creators have managed to go beyond cultural borders and become a point of reference for thousands of viewers. That is why I find it so fascinating that La Casa de Papel’s world is so attractive to Korean creators to make an adaptation. The fact that it is set on the Korean Peninsula also seems to be a milestone which I am really delighted about.”

The fifth installment will be the end of the series. The news was announced back in July this year. And fans were disappointed by this news. But, excited as well because they will finally be getting to know what’s happening at the end.

There have been many theories about the story coming upon the web. Could Alicia and Tatiana be siblings? Fans will need to have the patience for the release to know the plot. However, the fate of the Professor will finally come on the screens.

The platform announces the coming of new characters. There will be Miguel Angel Silvestre and Patrick Criado. For now, we don’t know about the role of the characters. Money Heist’s fifth season is going to be in the state of war. Things are going to shuffle. Other than these, the main characters of the show will return to conclude the story once and for all.

Money Heist Season 5 is going to bring a lot of twists and turns in the plot. The story will finally be taking a rest. However, the premiere will be taking place in 2021. Keep waiting for the thrill to arrive on the web. Till then, we will inform you with more updates.