It seems like Spencer will face a huge threat to his career in All American Season 4 Episode 8. He has been accused of stealing the state championship trophy. Also, he has confessed to stealing it to save Jabari. So, unfortunately, he might get expelled and jeopardize his future. Moreover, Jenn will make efforts to recover and impress Olivia in the next episode. Thus, keep reading to know all the updates about the eighth episode.

All American Season 4 Episode 8 Precap: What Will Happen Next?

The eighth episode of All American is titled “Walk This Way.” It looks like Spencer will face the threat of getting expelled in the next episode. Beverly’s Prom Party was canceled after the school’s gym was flooded. Jabari was responsible for stealing the state championship trophy, which resulted in the flooding.

However, Spencer took all the blame on himself. He will undergo a committee hearing about the incident. Unfortunately, he will put himself in a dangerous spot to save Jabari. Spencer thinks that he is standing up against the system. But his mother will advise him to think about his future. Thus, Spencer’s mistake could affect his future gravely in All American Season 4 Episode 8.

Morover, Jenn will understand why Olivia is trying to push her. So, she might work harder to earn Olivia’s trust. Layla will move towards a new career path while Coop and Patience might get along a little better.

In the previous episode, Jordan and Asher did not have a date for the prom party. Olivia wanted Jen, her sponsee, to take her sobriety seriously. Unfortunately, the most-awaited prom party was affected when the fire sprinklers at Beverly Hills went off and flooded the party’s venue, the gym. Moreover, Coop left Patience behind to help Amina prepare for her party. And Asher asked Jamie, the server, to pretend as her date at the party. She did it to keep JJ off her back.

Meanwhile, in All American Season 4 Episode 7, Spencer convinced Carter and Chris to allow the Beverly seniors to attend South Crenshaw’s party. Patience and Olivia insisted Lyla talk to the DJ’s producer during the party. The producer was interested in collaboration with Lyla, but she turned him down. Moreover, Jenn skipped the NA meeting, and Olivia decided to not sponsor her until she was serious about her recovery. Also, Jordan advised Lyla to take more risks in life. The conversation motivated Layla to talk to the producer again.

Meanwhile, Asher and Jamie shared a kiss while dancing at Crenshaw’s party. Patience told Coop that Amina referred to her as a best friend. But unfortunately, Spencer found G.W. unconsciously lying on the floor in All American Season 4 Episode 7.

Unfortunately, the show has gone on a mid-season break till next year. Now, the CW will air All American Season 4 Episode 8 on February 21, 2021. From then, the network will air a new episode weekly on Tuesdays at 8:00 p.m. ET, with an estimated runtime of around 45 minutes.

If you miss the latest episode on The CW, you can stream it on the network’s website and The CW app. In addition, the fourth season is also available on YouTube TV, DirecTV, Fubo TV, Hulu+Live, Xfinity, Spectrum, Vudu, and Amazon Prime Video. So, don’t miss the eighth episode and return for more informative episode previews. 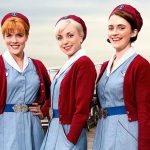