It seems like Frank will discover a shocking truth about his department in Blue Bloods Season 12 Episode 13. He will come across the presence of a dirty cop in NYPD. Frank will investigate the matter deeply while Eddie and Badillo will try to track down bookstore robbers in the upcoming episode. Thus, keep reading to know all you need to know about episode 13.

The thirteenth episode of Blue Bloods Season 12 is titled “Cold Comfort.” Frank will discover the presence of a dirty cop among the ranks of NYPD. Moreover, Eddie and Badillo will try to track down the bookstore robbers. They stole fairly valuable and rare works from the celebrated bookstore shocking everyone by the strangeness. Meanwhile, Erin will dig into the background of a new woman in Anthony’s life.

In the previous episode, Franks’s old friend Archbishop Kearns stopped him while making an arrest in Stephanie Miller’s murder. Kerans claimed that Frank had the wrong man. Kerans also told Frank that he met the killer, who came to the church and confessed to killing the victim. However, he could not reveal the killer’s identity as a sanctimonious confessional seal bound Kearns. However, Frank could not stop the arrest as they had no evidence against the killer. Frank asked Danny to look into the matter in order to bring justice to the killer and Stephanie.

Meanwhile, in Blue Bloods Season 12 Episode 12, Danny and Baez sneaked into the church to work around the church’s confidentiality constraints. They managed to find a hidden camera in a fake fire alarm. The duo felt that the suspect had been keeping an eye on the victim. However, Frank kept the rest of the team in the dark about the whole incident.

Elsewhere, Eddie handled a case with Erin involving a rapist. He showed up at the victim’s house. However, Eddie managed to arrest him. But they could not hold him for too long as there wasn’t enough evidence against him. Eddie convinced Erin to talk to the victim and found her claims convincing. She asked Anothony to look into the perpetrator. He was a lawyer with rape allegations in the past. The officers tracked down the first victim and put together a case against the rapist.

Further, Jamie and Joe worked with the task force to track down a man and arrest him. They found the man, but Jamie refused to hand the criminal to Joe. He did not like Joe’s methods and worked with the victim to give up some incriminating evidence. However, things went south when they orchestrated a drug deal.

The perpetrators kidnapped Manny’s family. So Joe and Jamie had to work together to rescue them. Eventually, Joe and Jamie reconciled during the family dinner. Moreover, Danny managed to find the real killer and caught up with him. Kerns’ revelation turned out to be true in Blue Bloods Season 12 Episode 12.

CBS will broadcast Blue Bloods Season 12 Episode 13 on January 28, 2022. The network airs a new episode weekly on Fridays at 10:00 p.m. ET. And each episode of the current season has around 45 minutes of estimated runtime.

If you miss the latest episode on CBS, you can stream it on the network’s website and Paramount+. Moreover, season 12 is also available on Sling TV, Hulu+Live, DirecTV, Xfinity, iTunes, Microsoft Store, and Amazon Prime Video. So, don’t skip the upcoming episode and keep returning for more thrilling episode previews. 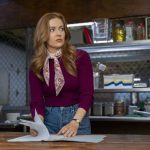