It looks like Lizzie will continue her search for Vulcan with Aurora in Legacies Season 4 Episode 13. Alaric will return to the Salvator School after recovering. And the students will plan a grand welcome for him. Meanwhile, Hope will struggle with her emotions while Cleo feels insecure about the changes. So, continue reading to learn all you need to know about episode 13.

The thirteenth episode of Legacies Season 4 is titled “Was This the Monster You Saw?” Lizzie will continue her quest with Aurora to find God Vulcan. However, they will have to accept the bittersweet results coming their way. Ben talks more about his family and its rich history. Jed will find his feeling getting deeper while Cleo would be worried about the changes that are happening to her.

Further, the Salvatore School student will be celebrating the return of Alaric, who woke up from a coma previously. Hope will be frustrated with the feelings of humanity as she struggles with the dilemma of being ruthless or emotional in Legacies Season 4 Episode 13.

In the previous episode, Hope managed to track down Aurora and capture her. Hope used extremely violent measures to extract information about the Gods from Aurora. However, she could not get Aurora to talk. Lizzie was disgusted by Hope’s methods as she pushed back and tried to treat Aurora. As a result, aurora told Lizzie everything she knew because she felt Lizzie was her brother Tristan.

Further, in Legacies Season 4 Episode 12, Lizzie freed herself from the sire bond and escaped with Aurora. She bonded with Aurra as they had the same experience of being treated as unstable and dangerous due to her bipolar disorder. Lizzie also asked for Aurora’s help to locate God Vulcan, who was capable of manipulating time. Lizzie felt that Vulcan could bring them back to the time when Tristan was alive and her life was not so miserable.

Elsewhere, Jinni granted Landon and Alaric’s wishes, Fortunately, Alaric came out of his coma and Landon stayed in Libo with Ted, who became a Necromancer again. Hope’s humanity started coming back as a result of Lizzie’s attempts to get through her. She lashed out and killed a man who almost hit Hope with his car in Legacies Season 4 Episode 12.

If you miss The CW’s broadcast, fans can stream the upcoming episode on the network’s website and the CW app. Moreover, the fourth season is available to stream on YouTube TV, Fubo TV, Spectrum, DirecTV, Hulu+Live, Xfinity, and Vudu. So, don’t miss out on the thirteenth episode and keep coming back for more thrilling episode previews only on TechRadar247.com. 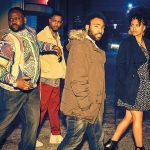