It looks like the team will go after an infamous weapons dealer after a series of murders in NCIS Season 19 Episode 18. The culprit has recently been released from prison, and his next target might be Torres. Apparently, Torres will have to deal with the consequences of an old undercover mission. So, keep reading ahead to learn all the essential updates about episode 18.

The eighteenth episode of NCIS Season 19 is titled “Last Dance.” Bodies begin to pile up after an infamous arms dealer named Reymundo Diaz gets released from prison. Moreover, Torres will be forced to face the consequences of his actions during an undercover operation that he conducted years ago. It seems like Reymundo might come after Torres to settle an old beef in NCIS Season 19 Episode 18.

In the previous episode, the NCIS team handled a suicide case of a retired Navy officer named Thomas Miller. The officer supposedly killed himself by jumping off a building. The postpartum report proved that Miller’s death was, in fact, a murder. Jimmy revealed that there were wounds on Miller’s forehead, which proved he was hit brutally.

Moreover, in NCIS Season 19 Episode 17, Miller’s wife Olive told the team about Richard Jordan. Miller got a restraining order against Jordan after he threatened to kill him. Jordan’s daughter was killed in a car crash, while Miller survived. The father blamed miller for the death of his daughter. The team talked to Jordan, who revealed that his daughter had been kidnapped. He gave Mcgee the number of the fraud, who might also be Miller’s murderer, as Jordan’s daughter was already dead.

Further, Parker and Knight went to see a woman who had recently filed a complaint against Miller. The woman named Nina was Miller’s second wife. Then, Nina told the NCIS team that Miller suddenly took off in his truck while he was in the market with her. The team checked the security footage and spotted Jordan in the market. Jordan revealed that Miller had not been responding to his calls. Moreover, Richard told that Miller ran away after seeing a silver SUV.

Meanwhile, the team discovered that the SUV belonged to Martin. He claimed to not have killed Miller after finding out about Nina and the other children. However, McGee and Knight found Martin’s DNA on the weapon used to hit Miller. The team suspected that martin was protecting someone. It was revealed that Olive confronted Miller about Nina and his other children. She lost her cool and began hitting Miller, which led to him falling off the roof in NCIS Season 19 Episode 17.

If you miss CBS’s broadcast, you can stream the upcoming episode on the network’s website and Paramount+. Moreover, the current season is available to stream on YouTube TV, Sling TV, DirecTV, and Fubo TV. Sp, don’t miss out on episode 18, and stay tuned for more thrilling episode previews only on Techradar247.com. 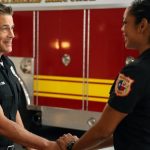