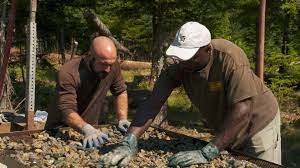 The Lagina brothers are close to proving their theory correct in The Curse Of Oak Island Season 10 Episode 4. Since the show began, everyone has tried their best to connect with the lure and find the legendary treasure. Season after season passed, and they never came so close to the treasure. But this season gives hope that they will finally get what they are longing for. Now in the upcoming episode, things will be miraculous. Now let’s see how things will move.

The Curse Of Oak Island Season 10 Episode 4: What Will Happen Next?

In the upcoming “Wharf And Pieces” episode, the team will continue digging deeper near the Money Pit. Finally, this season, the team has found evidence proving their theory, and the recent discovery will help them again reach the treasure. The team will be surprised when Gary unearths several artifacts. He will find them near the old ship’s wharf. Soon they will discover a shallower tunnel in the Money Pit. It will finally prove Marty’s theory about the off-set chamber correct.

In the previous episode, the geologist said that the new technique was great and helped them uncover the mystery. He believed that it had made things easier for them. Further, he cleared up another issue, the underground water created in the previous episode, where they found traces of gold. Now the team was running into the mainland, which was on the opposite side of the island. The team struggled a lot throughout the show, and now they had finally found the utility they were looking for. David later revealed that the northeast side of the swamp was visible now with the help of this new technology.

If you remember, they went down the camera in the first episode and later pushed the sonar down there, which helped them find the shaft. Gretchen and another member tried to find more clues about Oak Island. There was a vague connection with the secret connection with the Knight Templer. They found a glass made of metal that could be jewelry connected to the old era. The experts said it was a common type of pin, and they didn’t know much more about it. Later in the show, they continued with their metal detector and found some substances. But they didn’t know what it was.

Finally, the team is close to finding the treasure after searching and digging everywhere on Oak Island. Now in The Curse Of Oak Island Season 10 Episode 4, you will find more discoveries. It will air on December 6, 2022, at 9 pm ET/PT. You can stream it on History Channel and Sky History. Stay tuned. TechRadar247 will keep you updated.