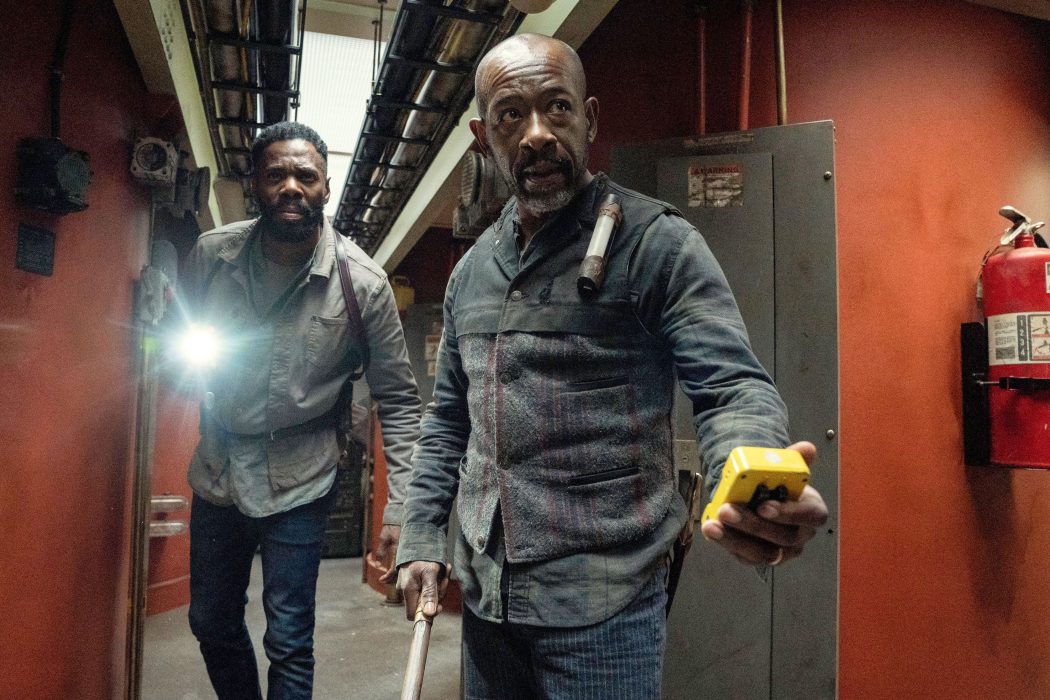 The TWD Universe fans have been on edge for what’s to come in Fear The Walking Dead Season 7. The latest trailer and the poster revealed that the upcoming season would witness Morgan and Strand standing against each other. Moreover, recently, the series showrunner has teased that last season’s finale does not only affect how things happen in the seventh season. Instead, the nuclear blasts would affect the whole TWD Universe.

It will be thrilling to witness how the explosive events of last season’s finale will impact the storylines and the characters of other shows like The Walking Dead: World Beyond and the original The Walking Dead. Further, the trailer of Fear The Walking Dead Season 7 also teases a Morgan Jones and Victor Strand face-off.

The eager fans have been awaiting this stand-off for a while now. As we know, Morgan Jones is a good person who likes to do things by the books. But, at the same time, Victor Strand is our big bad boy who listens to nobody. Both tried their best to stop Teddy from detonating ten nuclear warheads around Texas but failed miserably. As they fail to stop Teddy one more time, things have gone more bitter between the two. Talking about the nuclear explosion in Fear The Walking Dead, here is what the showrunner shared recently. Keep reading to know everything about Fear The Walking Dead Season 7.

Appearing on The Talking Dead podcast, showrunner Andrew Chambliss assured that the nuclear blast during the season 6 finale wILL have severe repercussions for the whole TWD Universe, not just Fear The Walking Dead. Further, Chambliss teased that the nuclear blast is a big enough event to change the TWD Universe fundamentally. In addition, he acknowledged that the explosion would indeed send shock waves beyond Texas and the show’s characters.

Indeed the nuclear blast during the last season will have a significant impact on the TWD universe. Even when the original series is set years ahead of Fear The Walking Dead, a big event like this may not go unnoticed in the storylines of the other Walking Dead shows. Moreover, TWD’s Chief Content Officer, Scott Gimple, shared his views about how the franchise will adopt the nuclear explosion scenario. Scott said that some characters are aware of the blast while others are not, and there are several ways to adapt to the explosion scene in the story. Further, he added that the characters lead the show focusing on how things affect those characters.

The characters define the mythology and not the other way round. Therefore, the show with different timelines can introduce the nuclear explosion through certain common factions like the Civic Republic Military (CRM). We’ve already seen the presence of CRM in all three Walking Dead shows. Therefore, it’s a strong possibility that CRM will spread the nuclear explosion events of Fear The Walking Dead across other series’.

The latest trailer of Fear The Walking Dead Season 7 deals with the aftermath of the last season’s finale explosion. We see Morgan and Victor failing to avoid Teddy’s plan to bring “The End.” At the beginning of the trailer, Strand is seen questioning Morgan’s leadership. He says that everyone, including him, is done listening to Morgan. Further, Strand takes the occasion to tell Morgan that he has failed, and it’s time for Strand to take over from him.

The next voice we hear IN the trailer is Morgan’s, who responds to Strand. Morgan advises Strand to rebuild the world and help the people. However, he threatens that if Strand’s actions harm people Morgan cares about, he will come for Strand. Meanwhile, AMC studio has also given out a press release for season 7 of Fear The Walking Dead. The press release states that Teddy has succeeded in bringing “The End” by detonating the nuclear warheads. After that, however, it will be in the hands of the survivors how “The Beginning” looks.

The press release further explains that the survivors will have a huge task in hand. The new world has become more threatening as the walkers are not the only danger for the survivors. The air outside is also filled with deadly radiation. They have to avoid while working on their new beginning. Therefore, the upcoming season will be highly testing for the survivors. At the same time, we will see some characters rising to the occasion even if they have to pay a hefty price.

Moreover, the latest Poster for Fear The Walking Dead Season 7 has also been released. The poster also teases a big stand-off coming ahead between Victor Strand and Morgan Jones.

Fear The Walking Dead Season 7 is set to be released on October 17, 2021, only at AMC. The upcoming season will feature 16 episodes. And the titles for the first two episodes are “The Beacon” and “Six Hours.” Further, the network will air each episode of the next season. Moreover, season 7 will be available a week earlier, on October 10 at AMC+. So, don’t miss it.